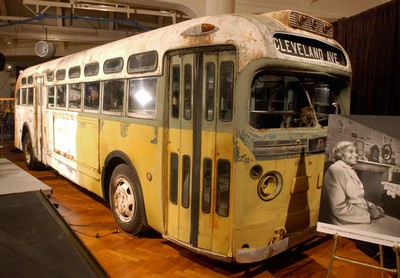 The Henry Ford Museum commemorates the 46th anniversary of U.S. civil rights legend Rosa Parks’ arrest aboard a Montgomery, Alabama, bus in 1955 by unveiling the bus she was arrested on in a ceremony in Dearborn, Michigan, on 01 December 2001. The Henry Ford Museum recently acquired the bus. Mrs. Parks was arrested on 01 December 1955 after she refused to give up her seat to a white person. AFP PHOTO Jeff KOWALSKY